Despite the northerly latitude of the range, Canadian Rockies weather and weather patterns compare closely with mountain ranges hundreds of kilometres to the south. Because the elevation of the Rocky Mountains increases progressively from north to south, mean temperature and annual precipitation in Banff and Jasper are very similar to those of West Yellowstone, Montana, and Leadville, Colorado.

The mountain snow-pack usually begins to disappear as temperatures moderate in April. By mid-May hiking is possible on a handful of low elevation trails in the major valleys and on south-facing slopes in the Front Ranges. By late June most trails below treeline are open, but many are still wet and muddy.

Above treeline trails open gradually from early July to early August, depending on slope exposure, snow-pack and weather. Mid-July to mid-August is considered peak hiking season. During this period we experience the warmest weeks of summer, there is usually less rainfall than June and early July, most trails are snow-free, and high country wildflowers are in bloom. Of course, this is also when trails are most heavily used and insect pests are flourishing. 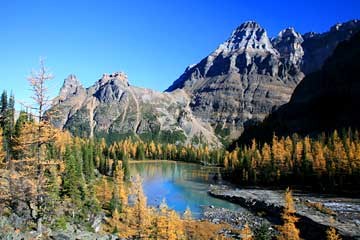 Golden larch are a major attraction for hikers at Lake O’Hara in September.

High country temperatures start to fall in mid-August, and early September usually sees the first snow falling in the high country. However, these early storms are usually short-lived, and the latter weeks of September and early October are often blessed by beautiful Indian Summer weather. (Many locals consider this the best hiking season.) However, weather changes quickly and dramatically at this time of year, so autumn backpackers should be prepared for surprise storms and the possibility of some cold, snowy hiking.

The most reliable source of weather condition is www.weather.gc.ca, which gives seven-day forecasts for towns across Canada.

For current weather conditions, check out this extensive collection of Canadian Rockies webcams.