The first map published by Gem Trek was Kananaskis Lakes in 1991. It was a manually-drafted 1:50,000-scale topographic map based on topographical information found on National Topographic System (NTS) maps produced by the Canadian Government. These maps, while detailed, were often compiled using older data and cropped following a grid system, meaning that a hiking trail may cross over from one map to the next, and in some cases it might have been necessary to purchase three or more maps to fully show a longer trail. For example, our Kananaskis Lakes map comprises sections of six NTS maps.

By using base data from NTS maps and reframing it, Gem Trek’s first early map showed popular recreation destinations in their entirely on one map. To the NTS data we added hiking and biking trails, cultural features, and recreational facilities.

Below left is a cropped NTS map (082J11) showing Upper and Lower Kananaskis Lakes. On the right is Gem Trek’s original 1991 Kananaskis Lakes map with roads and hiking trails highlighted, and facilities such as campgrounds and picnic areas. 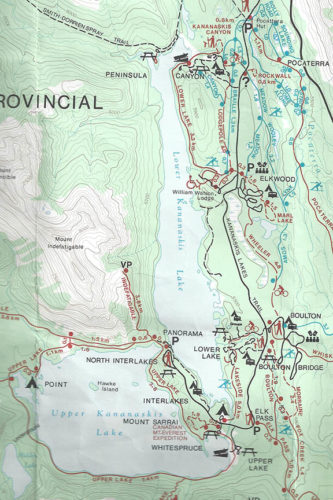 For the 1994 2nd edition (again compared to the NTS map on the left, below), fonts were changed to better reflect the cartographical standard of natural features in serif font and manmade features such as hiking trails in sans serif. Additional hiking trails were also added. 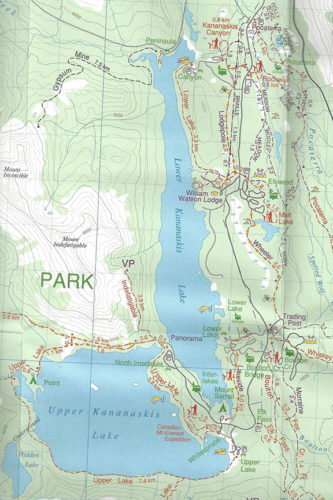 By 1998, Gem Trek had developed a distinctive 3D relief shading, which is used on our maps to this day. It features a lighter shade of green at lower elevations, graduating to darker at higher elevations. All areas above the treeline are depicted with shades of brown. As is a cartographical standard, shading depicts afternoon shadows. 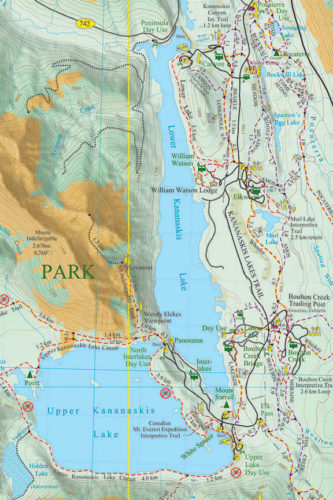 In the last 20 years, we have used data from various government agencies and the field to ensure our maps are as accurate as possible (especially when it comes to hiking trails) but the overall style and look of Gem Trek maps has changed little. The main changes in this period include modernized fonts, more colour to fonts and symbols, and all maps now have detailed trail descriptions on the reverse side.

Below, again is the NTS map on the left and beside it to the right a section of the 2019 Kananaskis Lakes map. 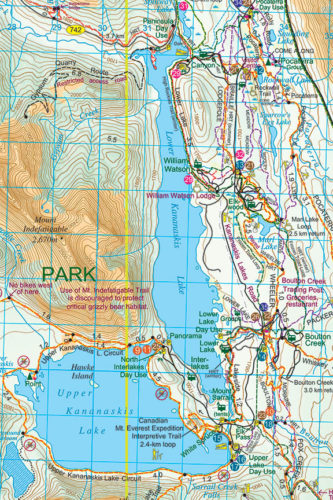